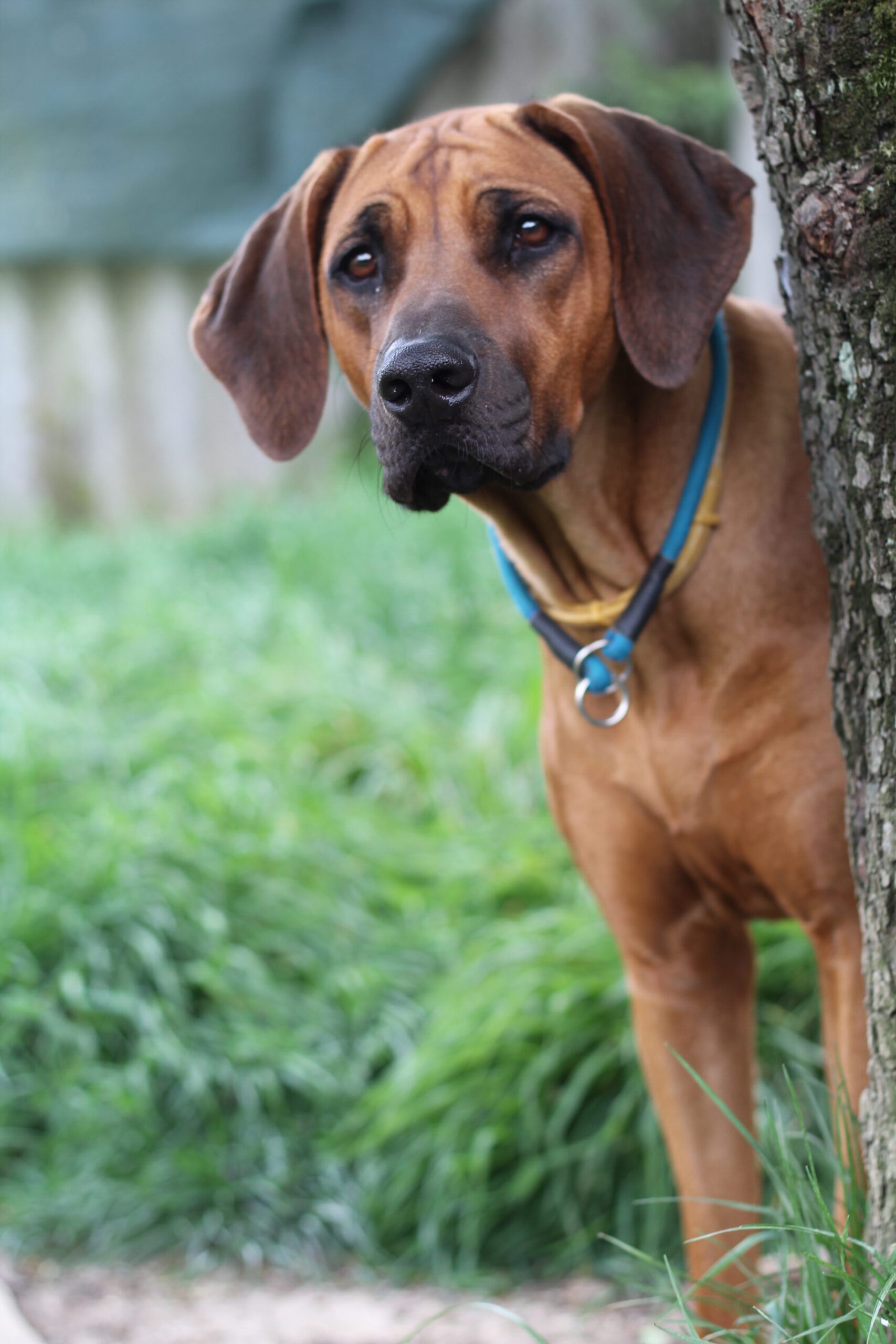 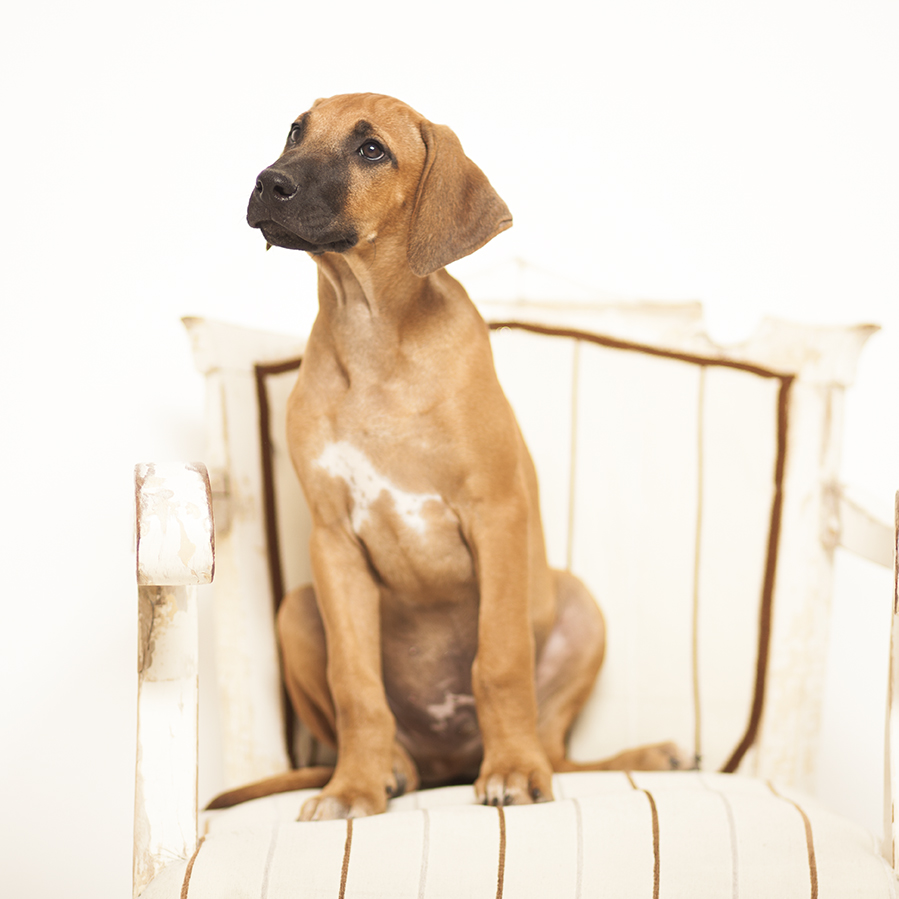 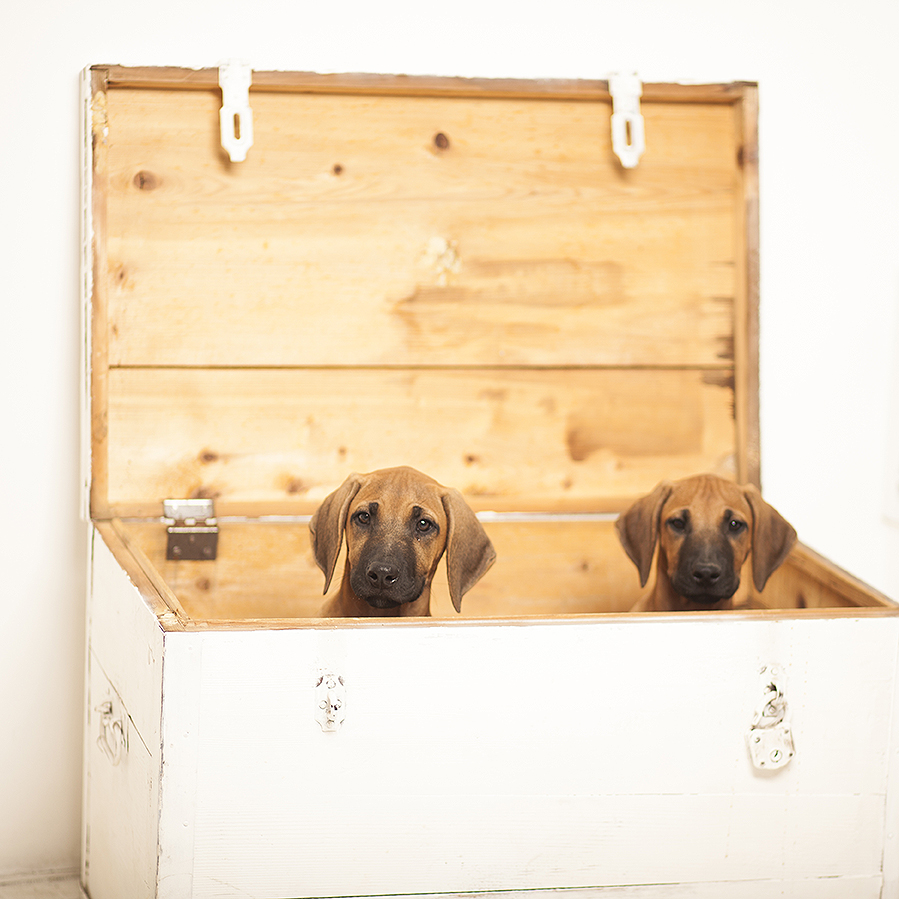 Young dogs are very playful and active and these two main characteristics mask the true characteristics of a mature dogs. Ridgebacks mature at a age of two years, which is quite late and at the age of two and a half years, they can be trained well since their learning abilities derive from late maturing.

Because of this it is most important, that Ridgeback owners treat puppies and later young dogs with gentleness and at the same time with solid dominance over the dog.

Ridgebacks remember even the earliest impressions from the interaction with humans. They respond well to flattering, gentleness and also to a firm hand to lead them. Because of their strong will and stubborness no results can be expected if treated with violence or abuse, however if they are treated with finesse, reward and firm and uncompromising leadership, much can be taught to these beautiful animals. If treated as mentioned before all it takes for the Ridgeback to comply with your order is to change the tone of voice.

Ridgebacks do not report with barking or growling unless it is really important, they will only make notice of their presence when there is actual danger to their pack, meaning their family, their masters. An unwanted guest a Ridgeback will great with a threat, his masters friends with carelessness.

Love and admiration is truly reserved for only the loved ones, the family the Ridgeback lives with. However a Ridgeback does not forget a friend and this fact remains true even after years of not seeing each-other.

With a Ridgeback you need not to worry if the dog will react to a threat, considering that he or she is napping all day long on the porch or what is far more common, on your couch. A reaction will  come no matter what, the most common indicator of the Ridgeback being aware of the situation is the raising of the head and thus showing his master that he or she is not asleep, merely not just yet responding. But if the need arises, Ridgeback will stand up on the ground, lower his head, stretch his neck and a look as firm as a massive statue. Very few people will be willing to risk to take this confrontation a step further. Only a direct command of their master or the opponents retreat will end this confrontation in peace.

As a family dog and a friend a Ridgeback shows exceptional devotion and love towards his master and family. It often seems that it is not you who owns a Ridgeback but rather the other way around. Because of Ridgebacks drive to unconditionally protect whatever they believe is theirs to protect, a family with a Ridgeback member will have very little to worry about in terms of personal safety.

Ridgeback is both a ‘couch potato’ and a fast lane runner.

Ridgebacks are a breed of dogs that need to interact and cooperate with humans, they need human contact, but they do not tolerate bad handling or abuse. This is a breed which is not meant to live in a kennel but inside a house or an apartment with the family, giving them physical contact and mental interaction, but above all human closeness. A ridgeback who does not have the daily interaction with people will not be a dog it as meant to be. If brought up well, life without a ridgeback will become unimaginable.

When working with a Ridgeback one needs to constantly bare in mind that abuse and violence will not bare any fruits. A lot of reward, cuddling, given quickly and in large doses will work miracles on a Ridgeback. Because of its natural tendency to protect one should not train a Ridgeback as a watch dog, however his natural abilities should be harnessed and with obedience and control training.

A ridgeback will tolerate children in various ways and degrees, from being totaly not interested up to affectionate loving and taking care of children, which can sometimes be considered alarming in a good way. At the same time, like every other breed, a Ridgeback must not be treated as a toy which is dragged around and being jumped upon, especially in puppy age.

Ridgebacks are by nature lazy breed and are in condition to indefinatly sleep on their cozy place, not wasting a single atom of energy more than necessary. Sometimes they forget the ease and agility by which they can and are able to move, in such cases it seems that they do not go around objects but rather trough them.

/FUN TEMPERAMENT FACT/ If an object is being thrown to a Ridgeback in order for them to fetch it back, their attitude will soon be, that their master no longer has any need for the object since he or she is throwing it away.

On exhibitions a Ridgeback will often seem uninterested, even bored when in vicinity of other breeds. However a Ridgeback will shine in grace and whole of its beauty, on the parking ground, galloping around in circles, after the exhibition has ended off course. One can not bring a Ridgeback to an open field and expect the dog to run around while the master lays back in the stool or sunbed and enjoys the view. Ridgeback will in such a case not move at all, he or she will wait until you move (or if you have a lounge bed it will find a way to lay in it together with you), all the previous descriptions of the breed will somehow fade away in oblivion, but once you start moving, running and playing with your Ridgeback, the dog will come to life, the dog will come into its element, full of energy, full of life. No matter how much such behavior amuses or irritates his owner, one must keep in mind that this is all a part of their nature, which often conceals the true intelligence of these dogs.

One should never forget that these are stubborn dogs, with strong will. They are also physically strong and that they do posses a talent to do things their way, as often as they can. On daily walks a Ridgeback will merely glance other dogs while passing them by or he or she will in a true Rhodesian Ridgeback style and manner dominantly look all around them, concealing the thin line of challenge. Contrary to common belief, a Ridgeback will not be looking for a fight, in fact a Ridgeback will try to avoid physical contact whenever possible, sometimes pushing it so far as it might be seen as skillful coward. On the other hand a Ridgeback does not tolerate insults, it will wait for as long as it takes to settle the score.

And in the end, the conclusion being, Rhodesian Ridgeback is not a breed suited for anyone. One needs to have ample of time for long daily walks and early and positive socialization with other dogs is very important for a stable and good nature of the dog. Whoever is looking for a beautiful strong dog with an independent spirit, Rhodesian Ridgeback is the choice.